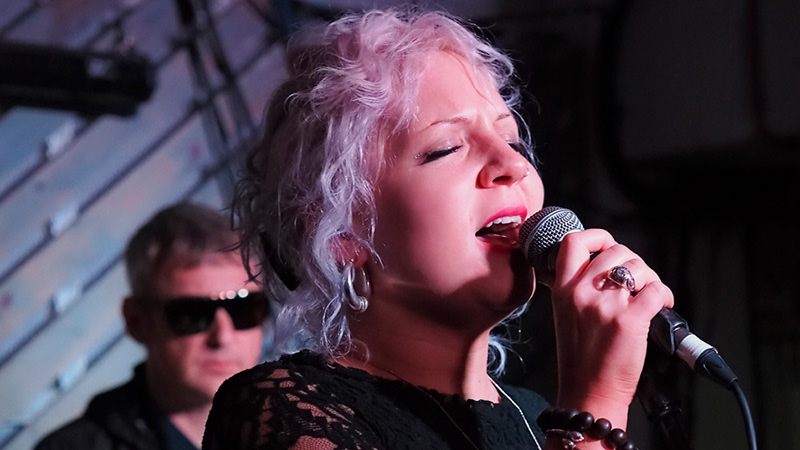 The vocalist on Markee Ledge and Leon Switch’s new track Make Your Move is Alys Be, a talented singer / songwriter who has previously worked with the likes of bass music producers Kryptic Minds, Distance and Von D. We caught up with Alys to find out more about her background.

My name is Alys Be, also known as Alys Blaze. I’m an MC, singer and songwriter. I don’t have any rules regarding what genre I vocal over, but I tend to work well over soul, breaks, hip hop, dnb, dub and jungle vibes.

Where are you from and to what extent would you say this influences your music?

I was born in Germany and bought up around the world in various countries due to my father’s job. Living abroad had a massive impact on me musically, from temple prayers in Brunei, to vinyl shopping with my parents in the markets in Hong Kong.

My family and I moved to the UK when I was 11 and I was gradually exposed to the UK scene. It was exciting and new for me and by 15 I was heavily into drum & bass, jungle, hip hop, happy hardcore, metal, rnb and reggae. Quite a colourful combination!

When did you first try your hand at singing? What made you try?

My mum is my inspiration for singing. I was bought up to the sounds of soul, funk and disco, in particular Otis Reading, En Vogue and Aretha Franklin and my mum always sang and was musical. To this day her music collection surprises me and puts me to shame!

At the age of 16-ish, I was singing along to a lot of rnb like TLC and Aaliyah, garage and loved dnb too. So at a rave in Witney, Oxford – I decided to grab the mic off the male MCs and sing some rnb hooks.

It went down really well, and I started writing my own lyrics from then onwards really! It was strictly bars for the first few years, then my vocal writing ability started to strengthen and deeper, darker, lengthy vocals started emerging.

How would you describe your approach to making music?

Full song structures followed when I started experimenting with hip hop and dubstep and once I moved away from dnb and slowed down a bit. I’ve always preferred the minimal approach when I’m writing songs, less is more.

What’s the usual process for working with a producer on a track?

Sometimes the beat comes first from a producer… like the tracks I made with Distance, ‘Falling’, and Mr Lager, ‘Tell Me’. But ‘Kryptic Minds’ ‘Can’t Sleep’ was written around the vocal.

So there is no process, exactly – either the producer initiates it, or I do, then it bounces back and forth until we’re all happy with it!

You’re probably best known for classic tracks like Can’t Sleep and Time Flies with Kryptic Minds, how did this collaboration come about and what do you remember most about the making of those tracks?

Kryptic Minds were on my wish list of producers to work with. I heard a track called ‘Torn’ on Skream’s Rinse FM show and I had already released ‘Tell Me’ at this point.

In the next few weeks, Si from KM emailed me and said him and Leon wanted to work with me. I was so excited! A few ideas went back and forth and then I sent them an accapella that I had lying around of what turned out to be ‘Can’t Sleep’.

I had previously sent this to a Von D but he didn’t want to use it as the vocal wasn’t clear enough. There were some arguments about which version came first – but the KM was the one! I do love both, though.

It was the same case for ‘Time Flies’, that was a pre-written vocal I had that I sent to the guys. It was originally written over a hip hop / dub beat and KM transformed it!

How did you meet Markee Ledge and what’s it like working with him?

I remember seeing Kosheen live at the Sanctuary in Milton Keynes when I was 17/18 and they blew my mind. They were definitely an inspiration for dark vocals in dance music for me. I think the event was One Nation? Memories!

Markee Ledge contacted me in 2014 at the end of the summer and said he liked my work and introduced himself. I was immediately keen! He sent me some beats and the tracks just grew so organically. We both appreciate the same vibes and atmosphere in our music and our ideas meshed instantly. Two hazy Prague sessions later and we were ready to mix down a bunch of tracks!

What can you tell us about your contributions to the Elevate album?

Well, I’ve been working with Markee from the beginning of the project. I’ve had a bit of an input generally and we talked about what we wanted as a collective, as individuals and in the future. He’s a great guy to work with and it’s all felt really natural without any conflicts of interest. I’m proud to be a part of the Elevate album!

What tracks, producers and labels are you feeling at the moment?
I’ll just drop in a few likes that spring to mind… Stones Throw, Brand New Wayo, Deep Heads, DMZ, Subfreq, New World Audio and the Manchester dnb MCs are killing it at the moment!